Dupuytren’s disease is a thickening of the fascial system of the hand (a layer of padding just beneath the skin). It is named after the French surgeon who first gave an operation for the condition, and as there is a family predisposition from Nordic ancestry, it is also called Viking’s Disease! Being a benign fibro-proliferative disorder (fibromatosis) it does not, so far, have a truly complete cure. We can only remove the affected tissue or limit its effects, but it may come back in the operated site (Fig1) or more commonly, in other fingers.

The usual course of the condition is an appearance of pits and nodules in the palm with tightness, followed by a slow progressive curling in of the fingers (contracture- Fig2). However, in certain predisposed individuals this progression can be quite rapid, and it is then important to have an early consultation for prevention of severe deformity. 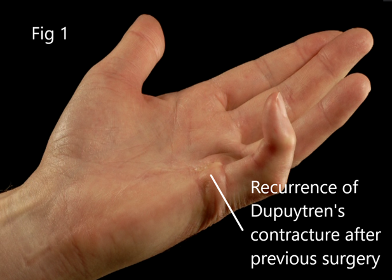 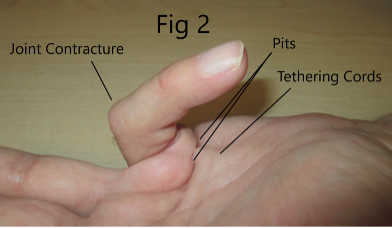 Treatment is tailored to the individual and the time-tested treatment is Surgical, with good to excellent success rates. Although Radiotherapy and Collagenase (Xiapex) injections have also been successful in early stages, the logistics or costs of these modalities are currently a barrier to widespread use. Xiapex has now been withdrawn from the market, so Surgery is currently the mainstay of treatment. In some individuals early nodules themselves can be uncomfortable and can be helped by careful local steroid injection.

Surgery is generally recommended (Fig 2) when it is possible to pass a pencil or biro below the contracted joint, while the palm is kept downturned on a table (the GP’s Table top or Pen test). Surgery can range from minimalistic (e.g. an outpatient needle manipulation) through limited removal (Fasciectomy- the commonest operation, Fig 3) to highly complex surgery involving joint releases and skin grafts (Fig 4). Mr Agarwal undertakes surgery for all degrees of Dupuytren’s, including previously operated hands. It is important to initiate treatment before the middle knuckle of the finger (PIP Joint) has contracted too far beyond 30 degrees (Fig 2), as surgery then becomes complex and the outcome completely dependent on excellent physiotherapy. 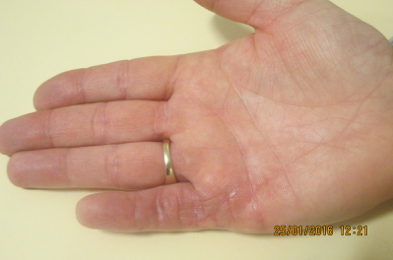 Fig 3 - The outcome following a Fasciectomy with well-healed soft scars and a full range of motion. 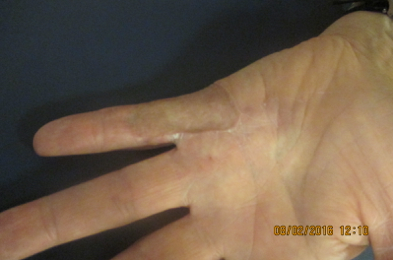 The outcomes after surgery for even milder degrees of contracture, as indeed for any surgery on the hand, are still heavily dependent on regular physiotherapy. Mr Agarwal therefore works very closely with 2 named Therapists at Ramsay Health and BMI, who consistently deliver the very best possible outcomes. Surgery is usually undertaken as a day-case under general, or preferably loco-regional block (the upper limb is numbed but the patient remains awake, making it safer and allowing quicker recovery). Mr Agarwal can also perform this purely under Local Anaesthesia using the new WALANT (Wide Awake Local Anaesthetic No Tourniquet) technique. Please allow for at least 2 weeks off driving and manual work.